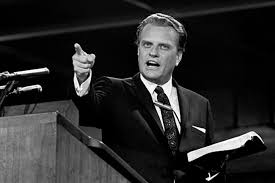 For the last week or so America and the world have been saying goodbye to Billy Graham. And I have been praising and thanking God for the life of this remarkable man. What a faithful servant of the Lord he was. I’ve watched a couple of television specials on his life and also wept through his beautiful memorial ceremony. I have been impressed again by his boldness and humility. And the legacy of his children! What powerful tributes to the man they called “Daddy,” and how faithful they are to take on his mantle. However, I do not believe I will ever see another man like Billy Graham in my lifetime.

He was America’s prophet and preacher. Our Isaiah, our Elijah. His message was simple and consistent. We are all sinners; God loves us and made a way for us through the death and resurrection of His Son, Jesus. We must accept Him as our Savior, and turn from our sins, and we must allow Him to be Lord of our lives. I think that was basically it. He never bowed to the culture or political correctness. He addressed wrongs in our society, such as racism, and called it what it is. Sin. He preached this message all over the world, reaching millions. I watched the documentaries on his life and was awed at the enormous crowds he drew everywhere he went. I remember going to see him in 1971 at Texas Stadium. When Billy Graham came to Dallas, it was a huge event even by Texas standards.

As I watched Billy Graham age, I knew that one day we would lose him. For a long time I have had the thought (and fear) that after Billy Graham left this earth, God would remove His hand of blessing and protection from America. We have been slowly watching it happened as we have moved from a society of faith and religion to a secular state.

This morning in my quiet time, I was reminded of just how blessed I have been to be born in an age and place where Jesus is known. It was relatively easy for me to come to the Lord. It didn’t cost me much. Actually, I think I paid a bigger price as a child and teenager who was NOT a believer. I went to school with Christians and Jews, we had daily Bible readings, we prayed, and we memorized the Ten Commandments. In Dallas public schools. My friends were Christians, and when they invited me to their church, I went. I heard the Gospel, and asked Jesus into my heart. That decision changed my life for all eternity. I often wonder what roads I would have taken had I not said yes to Jesus. T was culturally acceptable for me to become a follower of Christ. What a different America my grandchildren are experiencing.

Struck by watching Billy Graham bravely preach in communist countries, and thinking about the words in my morning devotional, I can’t help but think about those people who are living in dark places. North Korea, Syria, and China come to mind. How can they come to the Lord if they never hear the Gospel? And what a high price they pay to become believers. When I went to Kenya I saw how eager the people are to hear the Gospel, how desperate to have a Bible of their own. And I don’t even know how many different Bibles there are in my house!

As I write these words, I fear that America is becoming one of those dark places. Christian faith has become fair game for the mockers and haters. Being a Christian now carries a higher price tag than it did in earlier days. Even though we are still allowed to have our churches, and still allowed to worship, we are becoming more and more secularized. There are many competing activities for our time and attention on Sundays.

Although we don’t deserve it, I pray God would send us another Billy Graham. I pray for another Great Awakening. I pray it is not too late for America.