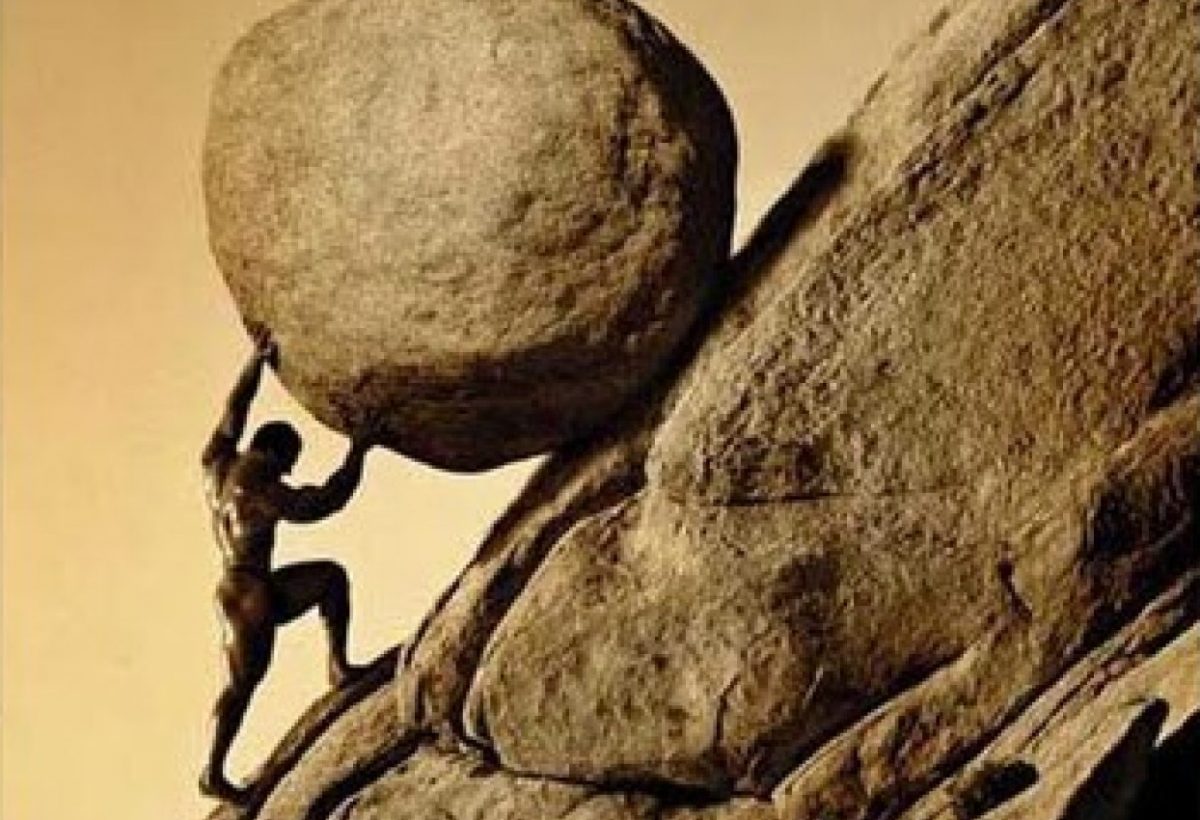 Do you ever feel like Sisyphus?  If you have forgotten the Greek mythology you learned in high school, let me refresh your memory.  Sisyphus was an evil king who was punished by the gods with the task of pushing a large boulder up a hill, only to have it roll back down each time he neared the top.  This happened over and over again for all eternity.  Can you imagine the futility?  Sort of like a really bad version of Bill Murray in the movie Groundhog Day.

I imagine most of us have felt like Sisyphus at some point in our lives.  The times when you feel like you keep beating your head against the same brick wall.  It could be a situation that just will not go away.  Perhaps it is that annoying co-worker or neighbor that you keep encountering in different iterations even after changing jobs or moving.  It might be the same argument you have with your spouse year after year with no resolution.  Maybe it is your recalcitrant teenager who keeps making the same bad choices over and over.

For some of us it might be that thing we resolve to never do again, but find ourselves repeating.  In Christian circles we refer to these bad habits as besetting sins.  A besetting sin is that one (or perhaps more) toward which we are naturally inclined.  It seems to call us…over and over.  For an alcoholic it is just that one drink, for someone who struggles with sexual lust it could be the lure of pornography.  For the one who resolves to pursue a healthier lifestyle it is the call of the bag of Fritos in the pantry or the appeal of the aptly named La-Z-Boy.

The rock may not be an active sin, but rather the consequences of a sin.  Sin always leaves a residue.  Ironically, it was Ravi Zacharias who said that sin will take you farther than you want to go, keep you longer than you want to stay, and cost you more than you want to pay.  The life of David in the Bible is a prime example.  God forgave him for his sins of adultery and murder, and continued to bless and use him, but David had to push the rock of family turmoil for the rest of his days on earth.

Sometimes (or often if we are honest) we want to blame others for our rock.  If only they would change I wouldn’t have to keep pushing that rock!  Blaming others is much easier than looking at myself.  Theologian John Piper took an eight-month sabbatical to do what he called a “soul check.” You can read more about it here:

Piper discovered that the remedy for these besetting sins was to put them in the crosshairs and consciously do battle with them.  Those sin rocks may keep tumbling downhill as long as we are on this earth.  But hopefully as we keep chipping away at them they will become smaller and smaller.

The rock is not always sin.  Maybe it is a situation you are in over which you have very little or no control.  The COVID pandemic for instance.  We have been pushing that rock for a year.  It might be that your rock is a chronic health problem.  No matter how many doctors you see or how many treatments you try, you can’t get that rock over the hill.  I have dear friends who deal with chronic pain…day and night.  But yet they persevere.  It is that perseverance that brings me back to Sisyphus (and how many more times am I going to type that name?)

The punishment from the gods was all I remembered about this story.  I had to do a little review on Sisyphus to remember the rest.  What I discovered was that Sisyphus never gave up.  He never surrendered to gravity.  He kept pushing, day after day. But he learned to see his condition as his purpose.  And he learned to find joy in it.  As a believer I remind myself that I am not alone in my battles.  God promises to fight with for me, to hold my hand, and renew my strength.  The Bible tells us that Paul also learned to look at his trials through a God lens and find joy in them,

“…knowing that suffering produces endurance, and endurance produces character, and character produces hope, and hope does not put us to shame because God’s love has been poured into our hearts…”   Rom. 5:3-5 ESV.

Pushing my rock with joy is all about discipleship.  It is what Eugene Peterson writes about in his book, A Long Obedience in the Same Direction.  We may stumble and fall, but we press on. I am so thankful that God’s mercies are “new every morning” and that he gives us just the right amount of grace and strength for each day.  And He promises to come alongside us and push for us.